With this post we want to bring to the attention of our community the great recognition that has been attributed to us during this last week with our wine, at the “PIWI WINE AWARD 2021”, the largest wine competition on resistant varieties in the world , where our wine competed with wineries from not only Friuli and Italy, but from all over Europe, winning the gold medal.

First of all, thanks go to those who contributed equally to the achievement of this goal, that is to the Oenologist Paolo Valdesolo and to Dr. Nicola Macrì, with all his splendid girls from the oenological laboratory.

Thanks also to Flavio De Santa, to dr. Michele Bona, to dr. Filiberto Fantin and Dr. Federico Fantin for all they have done in these seven years of work. A “thank you” also to the Municipality of Forni di Sotto for having always worked hard for the development of this initiative.

The purpose of this post, however, also has the important objective of drawing attention to what has been done, not to create unnecessary praise and good compliments, which are certainly pleasing, but to focus attention on a possible, if not last, possibility of development of agriculture in the Friulian mountain area.

The whole of the Friulian mountains, in the last fifteen years, despite the efforts made by the various administrations of all the municipalities of the territory, is undergoing an impoverishment, even quite rapid, both at a social, economic, infrastructural and working level.

We are losing (between people who leave and people who die) a percentage that fluctuates between 5% and 10%, with a constant trend in the last ten years: so you certainly don’t need a graduate in astrophysics to understand that if things are not reversed, in 20 years more than half of the communities that exist today will disappear.

We were not magicians, nor did we discover anything new, believe me: we simply used wine grape varieties that could not be grown 10 years ago, because they were not available on the market. They are varieties that adapt well to our climates, which have late germination and, above all, early ripening. They are hybrids that have nothing to do with GMOs or genetic engineering. And the best thing is that they require a number of phytosanitary treatments that are significantly lower than traditional viticulture (two or three treatments a year in very rainy years compared to twenty – twenty five in traditional viticulture). So it is organic farming with a very low environmental impact.

Finally, as demonstrated, they produce very valid results on an organoleptic level, for some even unique, given that our terroir is still “unexplored” in some ways “unique”.

Now we would like this result to be an encouragement to institutions to focus on this type of innovative agriculture, thus creating a territory that, without knowing it before, is also strongly suited to mountain viticulture. Let it be clear that we are not asked to abandon the development of traditional forms of agriculture, in which we have numerous excellences, but to begin to see beyond the traditional to go into the future, also made up of new solutions unthinkable until a few years ago, both for lack of suitable species, both due to the ongoing climate change, and because Europe increasingly requires from us an eco-sustainable agricultural development.

All the considerations about the after and what it would create are easily deducible. 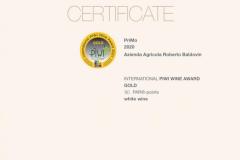 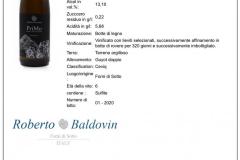 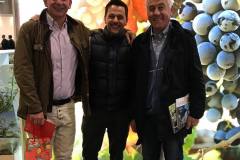